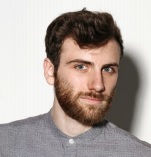 Thomas Carey Frazier, born in America, has been living in Russia for the past three years. After studying in Berlin in 2012 and St. Petersburg in 2014,
Thomas graduated from Vassar College in 2015.
Thomas has worked in various segments of the communications industry. In 2015, he moved to Yekaterinburg, Russia, where he established his instructive
and interactive skills as a teacher of English and German at Kolumb Language Center, a private language school in Yekaterinburg. After a fruitful and
successful year of teaching, Thomas moved onto WindSolutions, a Russian/Swiss tech company developing innovative applications for PC. At
WindSolutions, he worked as an independent contractor, spearheading the company’s marketing development by writing engaging and effective
messaging, communicating with journalists, and developing content for social media, including videos. During this period, he successfully pitched and
brought backlinks to the company site, found footing on YouTube with his most popular video exceeding 150,000 views, and established a consistent,
alluring tone for company texts – marketing and in-app included. This work strengthened the PR process and improved the reliability and accuracy of
internal marketing organization, including company communication. While teaching at Kolumb and working at WindSolutions, Thomas also worked on
independent projects, including writing articles that have appeared in leading news outlets such as the New York Times and Vice News. These articles
focused on clarifying Russia to the west and required Thomas to conduct in-depth interviews, do extensive research, and ensure watertight arguments, all
of which he undertook with gusto and dedication.
His background in media combined with more than 3 years of communications experience makes copywriting the perfect fit

What am I searching for in a company?

Seeking new opportunities in communication and
copywriting to further improve and develop a company’s
image.

Independent Contractor Produced high-quality, informative press releases and related materials. Ensured all messaging aligned with key business strategies. Developed content for social media, websites, newsletters, and other distribution channels. Brainstormed and collaborated with teams for new ideas and strategies. Identified media and press opportunities. Traveled abroad to promote the company and identify key competencies and competitors. - Restructured the foreign communication department and created a social media presence from scratch. - At an event, helped open up a dialogue that assisted in bringing new banks to the company - Participated in the creation and development of a whitepaper for a planned company ICO project. The white paper consisted of 27 pages, 10,000 words, and 90% of the English language, including language logic, needed to be corrected. - Created an ad for Facebook that directly led to increased client interest and brand penetration January 2018 - June 2018 (5 months)

Copywriter Wrote engaging, entertaining, and informative blog posts about challenging technical concepts. Made sure all texts were in line with company guidelines for style and tone. Edited and created content as varied as scripts for promotional videos to press releases and legal documents. Helped craft content for social media. Rewrote foundational company white paper. Collaborated with international teams including developers, editors, as well as PR and marketing agencies to develop consistent high-quality messaging. - Wrote an article for mass media that was rewritten and reposted on numerous unique online platforms - Edited the script for a YouTube series on blockchain and hosted the series, directly leading to increased interest both in the technology and the company - External marketing company evaluated the blog as the company’s most effective and successful content stream - Rewrote the 20,000-word white paper from scratch, independently researching referenced concepts and technologies. July 2018 - now (2 years 9 months)

Independent Contractor Created informational and promotional videos to explain and advertise company software. Reviewed, edited, and wrote website content including blog articles, product descriptions, and landing pages. Identified and pursued media and press opportunities. Collaborated with teams to develop and brainstorm new product ideas. - Most popular FAQ video currently has over 150,000 views on YouTube, becoming an important traffic source for the company website, directly leading to an increase in product downloads - Wrote text and developed personality for new app, CopyTrans Cloudly, an iCloud photos manager, which, in conjunction with the work of the company graphic designer, led to the first modern, fun app in the company line - Assisted in American localization and marketing, directly improving communication with the company’s major source of revenue - the US market - Collaborated with teams focusing on the German, French, and Japanese markets respectively to create content for their specific needs, a German video about iCloud photo security receiving 14,000 views on YouTube, directly leading to the German market having the highest downloads of CopyTrans Cloudly - Renamed the company August 2016 - January 2018 (1 year 5 months)

Vassar College Liberal arts college specializing in the humanities Poughkeepsie, NY Course of study focused on German and Russian cultural and linguistic studies, with a strong sub-focus in English language and literature, including creative writing 2013 - 2015

New York University College of Arts and Sciences - humanities college within the university framework • New York, NY Course of study focused on German cultural and linguistic studies, with a strong sub-focus in English language and literature 2011 - 2013